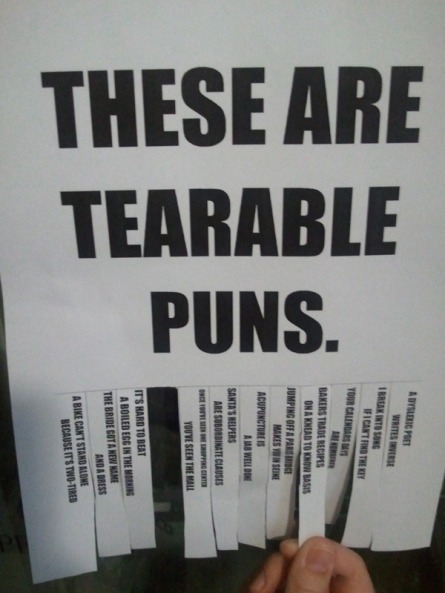 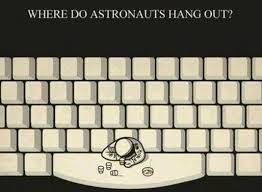 “I tried to catch fog the other day, but mist..”

Why did the scarecrow get a raise? Because he was outstanding in his field.

“You stole my Microsoft Word?! You’ll pay, I tell you! You have my Word!”

“I know a guy who’s addicted to break fluid, but he says he can stop anytime.”

How does Moses make his tea? Hebrews it.

“I stayed up all night to see where the sun went, and then it dawned on me..”

“I’m reading a book about anti-gravity! I can’t put it down.”

“I saw a theatrical performance about puns. It was a play on words.”

“At first they thought my blood type was Type A, but it was a typo.”

“The girl said she recognized me from the vegetarian club, but I’ve never met herbivore.”

“The class trip to the Coca-Cola Factory was awesome! I just hope there’s no pop quiz.”

The Energizer Bunny was arrested: charged for battery..

“At first I didn’t like my beard, but then it grew on me.”

What do you call a dinosaur with an extensive vocabulary? A thesaurus.

What does a clock do when it’s hungry? It goes back four seconds.

“I wondered why the baseball was getting bigger, and then it hit me..”

What do you call an alligator in a vest? An investigator.

“Sir, it’s the Pentagon..” “The Pentagon?! What is it?!” “It’s a shape with five sides and five angles, but that’s not important right now!”

“Ma’am, it’s the hospital..” “The hospital?! What is it?!” “It’s a place where they put sick people, but that’s not important right now!”

Why are fish bad tennis players? They don’t like getting close to the net.

When I first learned to reckon Truth and my position in Christ: